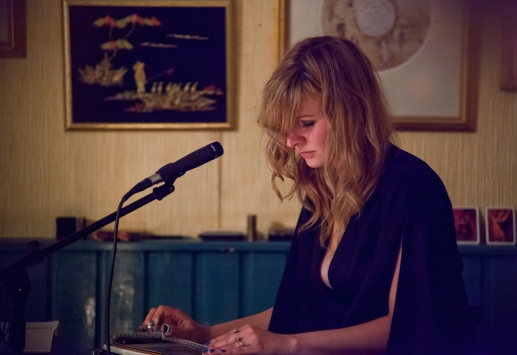 The daughter of a coal miner, weaving a trail from West Virginia to Texas and now residing in Scotland, Heather Leigh furthers the vast unexplored reaches of pedal steel guitar. She’s performed and released music since the 1990s as a solo artist and with a wide range of uncompromising collaborators from Jandek to Robbie Yeats of The Dead C and has toured extensively throughout the US, Europe, Australia and New Zealand. Her playing is as physical as it is phantom, combining spontaneous compositions with a feel for the full interaction of flesh with hallucinatory power sources. With a rare combination of sensitivity and strength, Leigh’s steel mainlines sanctified slide guitar and deforms it using hypnotic tone-implosions, juggling walls of bleeding amp tone with choral vocal constructs, wrenching single note ascensions and raggedy American Primitive harmonica.


“All notions of the pedal steel’s laid-back, country harmony are shattered as Leigh extols jagged notes and blocks of electric noise that seem to rail against rock, jazz and other notions of freedom music.” Dusted Magazine