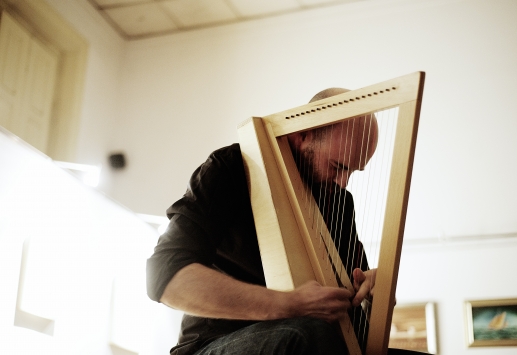 Rhodri Davies was born in 1971 in Aberystwyth, Wales and now lives in Gateshead in the northeast of England. He plays harp, electric harp, live-electronics and builds wind, water, ice, dry ice and fire harp installations. He has released four solo albums: Trem, Over Shadows, Wound Response and An Air Swept Clean of All Distance. His regular groups include: a duo with John Butcher, a trio with David Toop and Lee Patterson, Cranc, a duo with Richard Dawson, The Sealed Knot, Common Objects and a trio with John Tilbury and Michael Duch. In 2008 he collaborated with the visual artist Gustav Metzger on ‘Self-cancellation’, a large-scale audio-visual collaboration in London and Glasgow. New pieces for solo harp have been composed for him by: Eliane Radigue, Phill Niblock, Christian Wolff, Ben Patterson, Alison Knowles, Mieko Shiomi and Yasunao Tone. In 2012 he was the recipient of the Foundation for Contemporary Arts, Grants to Artists Award.